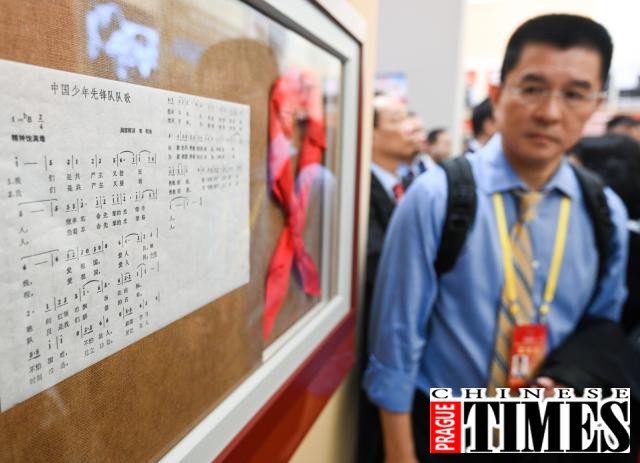 An attendee views an exhibit at an event in Beijing marking the People’s Republic’s foundation 70 years ago. [Photo/Xinhua]

Chinese people living abroad on Saturday praised their motherland for its economic takeoff, elevation in global status and technological advancements.

They gathered at an exhibition in Beijing marking the People’s Republic’s foundation 70 years ago.

Chen Minghua, a US citizen born in the coastal province Fujian in 1948, said he was most impressed by the colored signs and installations paying tribute to China’s successful testing of atomic and hydrogen bombs in the 1960s and the launch of its first manmade satellite in 1970.

The 71-year-old, whose jobs in the US have ranged from restaurant owner to real estate developer, said China has seen speedy progress in all aspects since he left in 1968.

“I am very proud as an ethnic Chinese,” he said, whose surname translates as “never forget China”.

Chen was one of some 2,000 Chinese emigrants to about 130 countries and regions who flew into Beijing for the founding ceremony on Tuesday at the invitation of government.

As part of their itinerary, they were invited to the display, covering over 155,000 square meters at the Beijing Exhibition Center.

It comprises five chapters showing how Chinese people, under the leadership of the CPC, established and developed socialism and worked to build a modern socialist country.

Ji Zhihai, a Chinese national living and working in Italy since he went there for study in 1986, said China has transformed beyond recognition in a short time, benefiting Chinese emigrants doing business overseas through its Belt and Road Initiative (BRI).

The former law student, elected a legislator in the Italian city Forlì in 1997, said he had been using his expertise to help Chinese communities there, hoping that they can be successful by being diligent, just as he has been.

Li Rujiang, an exporter of Chinese commodities to the Czech Republic, said many overseas Chinese people like him have demonstrated solidarity with the country and they wish to be involved in China’s global strategies like the BRI.

“I hope that we expatriates could get more involved in the BRI,” he said, which he said will be beneficial for all in involved.

China has more than 60 million of its people living abroad, scattered across more than 200 countries and regions, central government figures show. They have long been regarded a major part of the Chinese nation and ambassadors of Chinese culture and friendships.