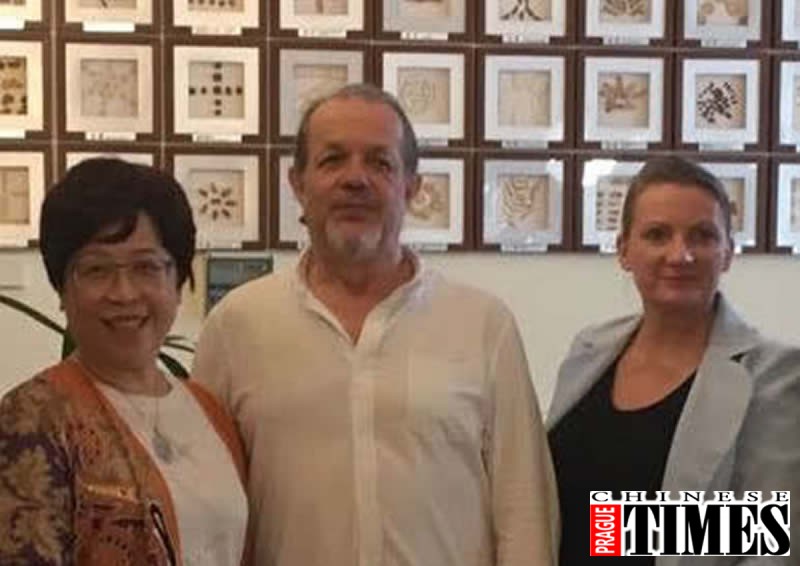 During this meeting the both parties promoted TCM. Czech organizers were very honored to welcome the top experts, medical doctors from Shuguang. Mrs MA, leading this delegation, has been visiting TCM Center for the third time. She was very pleasantly surprised to see the development and new activities of Czech partners.
Nearly seventy people listened the lecture of Dr. Med. Guan Xin, PhD, Chief Adviser of fund, and then could everybody use the possibility to consult with famous medical doctors personally. All of them, within Mrs. MA, coul treat in Prague for many years and they would have more and more clients here. 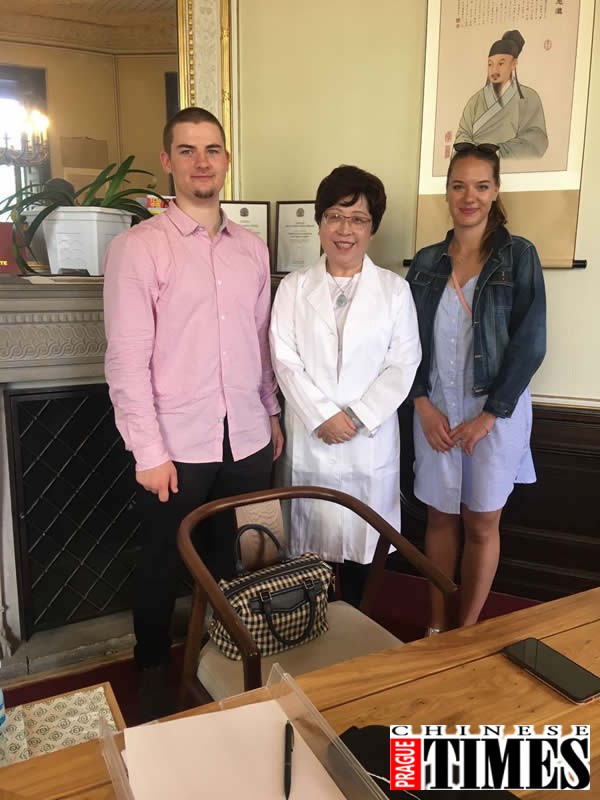 TCM is very known in Czech Republic, but there is not accredited education. Only a little bit more than 500 Czech Medicine Doctors is allowed to treat by TCM officially, mostly acupuncture. So it is very important to promote Chinese Medicine Doctors and professional level of TCM treating. To show and present them it personally, their knowledge and care show here, in Prague. Many Chinese and Czech people used to visit Czech-China TCM Center, and ask contact to Dr. Med. Guan Xin, PhD, former Chief Doctor at University Hospital Hradec Kralove. After finishing inter government project of TCM Clinic there, he moved to this TCM Center in Prague. As a Chief Adviser he has lectures here, seminaries and individual consultation for public. 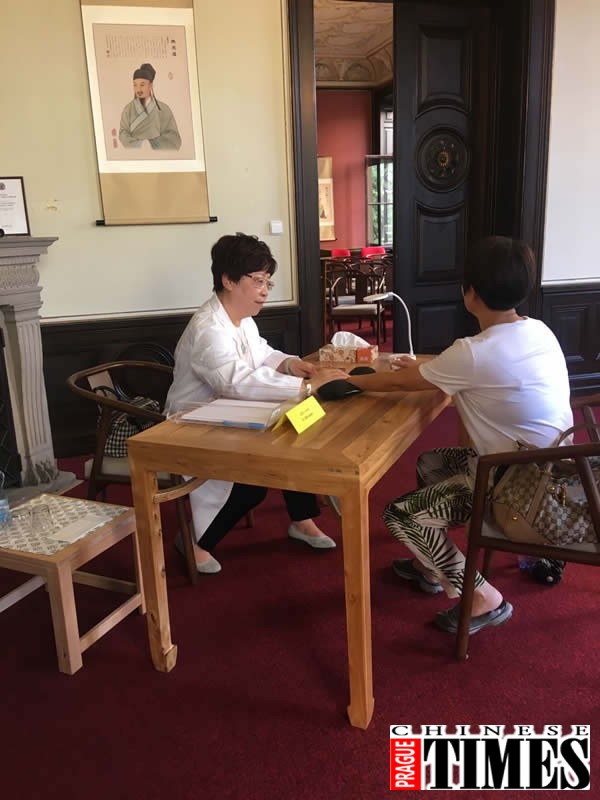 “Our aim is to present the highest level of TCM. We have met the top doctors in Shanghai, Beijing and other cities from China. Many of them have been visiting our Czech-China TCM Center in Prague. The highest level, it means at first Chinese medicine doctors. We prefer to show Chinese medicine doctors, ways of treating, products in original and authenticity. Czech doctors and practitioners could learn by them, to have lectures and seminaries. We could send a few of them to Chinese hospitals, time to time. Our product is informed client. He know, what about original TCM, who is able to offer the professional care, where he could find it. It is the most important information for Czech client now,” said Jan Hovorka, President and Founder of Endowment Fund for Support of Traditional Chinese Medicine and Alternatives.

For everybody, who is interesting to visit this interesting place, connecting relations between China and Czech Republic, is possible to come Opletalova 19, Praha 1. All information you can find on info@nfptcma.cz or 773007597.

PRAGUE – Hundreds of thousands of people rallied Sunday in Prague, capital of the Czech Republic, demanding resign of the Prime Minister Andrej Babis.

The rally in Letna Park, estimated to be attended by more than 250,000 people, was the culmination of a series of demonstrations in recent weeks against Babis, who has faced investigations over alleged fraud and conflicts of interest.

Waving Czech and also European Union (EU) flags, the crowd chanted “Resign, Resign” and “We’ve had enough”. “No Tolerance for Lies and Fraud,” read a banner unrolled by the demonstrators.

A preliminary EU report released by Czech media in May said that Babis might have had a conflict of interest over EU subsidies involving his former business empire Agrofert. Babis denied wrongdoing and accused the EU of trying to destabilize the Czech Republic.

The much-anticipated two-day European Union summit ended on Friday with no progress toward filling the institutions’ top jobs and no consensus on ambitious net-zero greenhouse gas emission target by 2050.

A crisis summit has been scheduled for June 30 in order to fill the posts before the new European Parliament meets in Strasbourg, France, on July 2. Meanwhile, most EU leaders attending the G20 summit in Osaka, Japan, for from June 28 to 29 are expected to hold informal talks on their own issues.

Shada Islam, director of Europe and Geopolitics at Brussels-based Friends of Europe, said she hopes for a quick decision on the EU leadership. “If they keep postponing and are not so decisive, I think we are sending a wrong message to Europeans and to the rest of the world,” she said on Friday.

She said whoever assumes the leadership should be strong and popular enough and able to connect with European citizens who showed the highest turnout in 20 years in the elections for the European Parliament in late May.

“They should be able to work in an efficient manner with world leaders and be strong enough to galvanize worldwide support. We live in a very challenging world, and Europe needs strong and effective leadership,” Islam said.

There have been major disagreements between leaders of the two major member states. German Chancellor Angela Merkel favors the process of lead candidate, known as Spitzenkandidaten in German. She supported Manfred Weber, the lead candidate of the center-right EPP, the largest bloc in the European Parliament, a bloc of which Merkel is a member.

But French President Emmanuel Macron and some other EU leaders oppose Weber to replace Jean-Claude Juncker as president of European Commission.

Vivian Linssen, founding executive director of the International Multidisciplinary Neuroscience Research Center, said even if the leaders will be chosen through the system of Spitzenkandidaten, they have to address the public suspicion and distrust regarding institutions, politicians and bureaucrats.

“The top priority should be to recover lost trust, because without trust, any policy shall fail,” said Lissen, who announced his race as an independent candidate for the presidency of the next European Commission.

Besides a deadlock on EU leadership matters, the summit failed to broker an agreement that would see member states cut carbon emissions dramatically by 2050. Poland, Hungary and Czech Republic refused to sign the text for the net-zero carbon emissions target by 2050.

“I would like to express my regret at this point that a consensus for ensuring a transition to a climate neutral European Union by 2050 was not reached,” said Romanian President Klaus Iohannis. Romania’s six-month presidency at the Council of the European Union will end on June 30.

At the news conference, Tusk also noted that the biggest risks to the global economic outlook are trade and geopolitical tensions.

“We will take this message to the G20 in Osaka, where we will try to persuade our partners to cooperate, rather than threaten one another,” he said.

Former Czech President Vaclav Klaus, together with Czech Ambassador to China Vladimir Tomsik and Czech Philharmonic General Manager Robert Hanc, visit the Memorial Hall of the Victims of the Nanjing Massacre and pay tribute to the 300,000 victims, Jiangsu province. [Photo provided to chinadaily.com.cn]

For the 70th anniversary of the start of China-Czech diplomatic relations, the Czech Philharmonic, one of the world’s top orchestras, kicked off its 2019 China concert tour in Nanjing on Saturday.

The orchestra held its first performance in China at the Jiangsu Art Center, and many famous performers were included in the roster. The orchestra’s Nanjing program was conducted by renowned Czech conductor Petr Altrichter, who was named Voice of the Czech Republic and My Country respectively over the two nights of the weekend.

As a delightful surprise for the China tour, the orchestra will work with the Jiangsu Symphony Orchestra to play My Country, the Chinese song of the same name composed by Liu Chi.

Former Czech President Vaclav Klaus said, “The Czech Philharmonic can serve as a great ambassador of Czech culture and I am happy it can be presented to Chinese audiences. I am very glad for its cooperation with Nanjing.”

The former president, together with Czech Ambassador to China Vladimir Tomsik and Czech Philharmonic General Manager Robert Hanc, visited the Memorial Hall of the Victims of the Nanjing Massacre and took part in a flower-laying ceremony in memory of the 300,000 victims.

A Nanjing delegation has been invited to visit the Lidice Holocaust Memorial and the site of the Terezin Nazi Concentration Camp in the Czech Republic.

“The Czech Republic and China are both countries that faced similar struggles during World War II,” Tomsik said. “We have strived for peace and peaceful cooperation. Through the universal language of music, different races, nations and countries can connect to build a community with a better and brighter future for mankind.

“I believe endeavors like the Czech Philharmonic’s tour of China can strengthen bonds of friendship between countries and their peoples. We can build a more prosperous future together.”

The Czech Philharmonic Orchestra also signed a memorandum of cooperation with Jiangsu province to form a strategic partnership with the city of Nanjing for the next five years.

According to the memorandum, the two sides will strengthen cooperation in music performances, music festivals, artist exchanges and art education.

Beginning this year, the Czech Philharmonic will send their musicians to China yearly for both educational and performance purposes. Musicians from the Jiangsu Symphony will be invited to participate in cultural exchange projects in Prague.

“We are excited to share Czech history and culture through classical music,” Hanc said.. “Since music is the most beautiful, borderless and universal language, we firmly believe music can become a very important means of communication between the Czech and Chinese people.

“Through music we can further enhance our mutual understanding.”