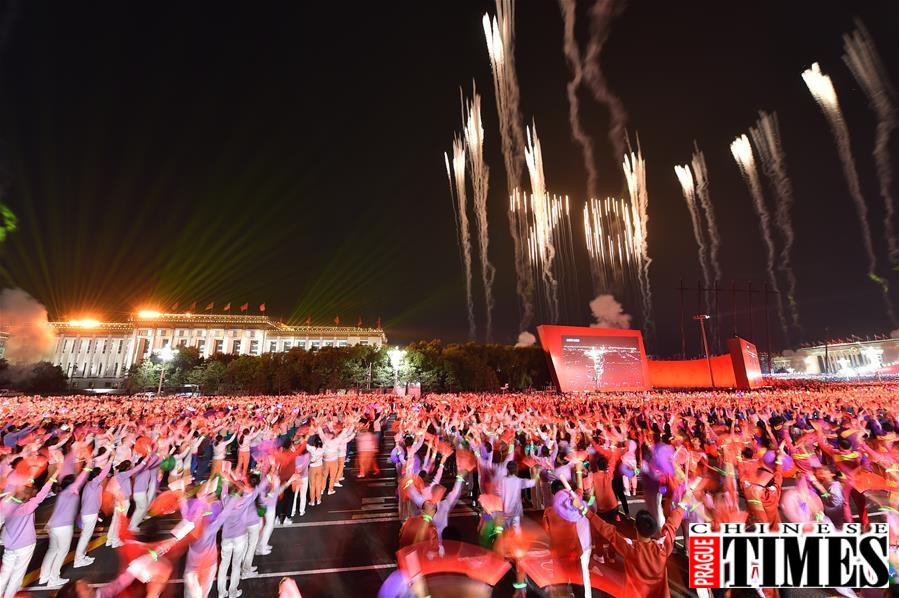 A grand evening gala is staged on the Tian’anmen Square to celebrate the 70th anniversary of the founding of the People’s Republic of China, in Beijing, capital of China, Oct 1, 2019. [Photo/Xinhua]

Leaders of foreign countries have sent a multitude of congratulatory messages to Chinese President Xi Jinping to convey their best wishes on the 70th anniversary of the founding of the People’s Republic of China.

Iranian President Hassan Rouhani extended his sincere congratulations to the friendly Chinese people. Iran is willing to work with China to continuously enhance the common interests of the two countries and safeguard world peace and stability, Rouhani said, adding that he wishes China prosperity and its people happiness and health.

Algeria’s interim President Abdelkader Bensalah wishes the friendly Chinese people continuous development and progress. As Algeria and China have established a comprehensive strategic partnership and are working together on the Belt and Road Initiative, the prospects for the development of bilateral relations will be even broader, he said.

Kuwaiti Emir Sheikh Sabah Al-Ahmad Al-Jaber Al-Sabah said China has made great development achievements in past decades, which has consolidated its core position in the world political and economic arena. He wishes the friendly country and people continuous progress and development.

On behalf of himself and the Iraqi people, Iraqi President Barham Salih said that he would like to extend his sincerest congratulations and best wishes. Iraq is willing to continuously deepen its friendship and cooperation with China, and fulfill the two peoples’ expectations of prosperity and development, he added.

Israeli President Reuven Rivlin said that under the leadership of the Communist Party of China, China has made great achievements that have attracted worldwide attention. Israel attaches great importance to good relations with the nation and is willing to work with it to continue to build and strengthen their innovative comprehensive partnership, he said.

Ugandan President Yoweri Museveni said that the old generations of Chinese leaders, including Chairman Mao Zedong, risked their lives and worked hard for the freedom and prosperity enjoyed by the Chinese people today. “I am willing to commemorate their contributions and courage with you,” he added.

Nigerien President Mahamadou Issoufou said that under the leadership of the CPC, the Chinese people have built China into a prosperous, democratic and respectable country in the past 70 years, and that he believes the “Two Centenary Goals” and the Chinese Dream of national rejuvenation will certainly be realized.

Ghanaian President Nana Akufo-Addo said the Ghanaian people join the Chinese people in celebrating the birthday of the PRC, and in recalling the heroes and martyrs who have laid the foundation for the development and progress of China. China’s implementation of reform and opening-up has accelerated its transformation and brought more benefits to its people, he noted.

Mozambican President Felipe Nyusi said China enjoys a long history and a civilization dating back thousands of years. He added that the PRC, since its founding 70 years ago, has set an example in making tremendous achievements in various fields, especially in reducing poverty and improving its people’s livelihood.

Namibian President Hage Geingob greeted the brotherly Chinese people with the warmest congratulations, saying that Namibia will continue to develop its relationship with China.

Serbian President Aleksandar Vucic said that China, guided by its visionary leaders, has grown into one of the most respectable partners in the world and has made important contributions to world peace and development, adding that he believed the country will surely realize the Chinese Dream.

Czech President Milos Zeman said that the Czech Republic, together with other countries in the world, has witnessed the growth of the PRC into a major country. He wished the Chinese people even greater success.

Finnish President Sauli Niinisto said that the 70th anniversary of the founding of the PRC was a landmark, and China’s development speed and its rapidly-rising leading role in the global economy would have a broad and positive influence over the world.